After “finishing” both my Prometheum Relay Network and my Munitorium Armored Containers, I realized that they both had a series of lights on them that might look better “lit up.”  Frankly, any chance I have to spray lights on my terrain is something I jump at the chance to work on (so I can get better at the technique).  Oddly enough, I don’t ever do that same effect on my Ultramarines, but maybe that’s just because I don’t feel like I’m good enough with it to push it out to my figures?

Rather than delve deeper into my subconscious though, I figure I’ll just continue to let it fester while I continue this post…

So yeah, I was originally going to leave the lights dark on both terrain features, and was happy with how it looked on the relay network, but I didn’t like how they looked on the armored containers.  I had painted the trim on all of the light fixtures in silver, but the inside was just whatever the underlying base color was.  I tried painting in yellow dabs with a brush, but it seemed out of place, so that lead me to the airbrush. 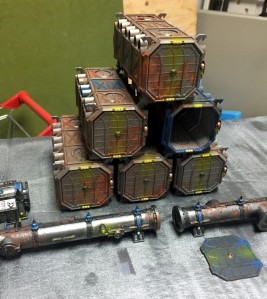 That, coupled with the fact that I don’t like to reload the airbrush lead me to paint all of the lights in yellow.

I actually like the way the effect turned out, but I’ve had at least one friend comment to me in such a way that it was pretty clear that he didn’t think it was as successful as I did.  In my opinion though, the airbrush did a good job of making it look as if the lights are truly glowing, and I tried my best to position it so that the lights from the top shined down and the ones from below shined upwards, with just a little bit of seepage around the edges.

Honestly, I was a little saddened by my friends comment.  Granted, he didn’t say anything mean–but it was more the curious absence of any response.  I distinctly got the feeling that he was adhering to the “If you don’t have anything nice to say” adage.  It makes sense though, because he’s the friend of mine that uses this effect more often than any other (and to great success, mind you), so he does have a great breadth of knowledge on the technique.

Come to think of it, maybe he’s right.  Even when I look at the photos now, they look fine to me, but if he’s that good at the effect and hesitated to find anything nice to say, perhaps it’s a failure after all?

n hindsight, I probably would’ve been better varying things up a bit: perhaps not making all of the lights yellow, or even not painting all of the lights as functional  (with dilapidated containers like this, it seems only natural to assume at least some of the lights wouldn’t work at all).  It also would’ve made sense to have the lights on the keypads glow–perhaps in a different color (green certainly comes to mind).

But the basic effect seems to work for my purposes.  Though they’re distinctly yellow in color, it at least adds a little variance when you consider that the object source lighting I used on all of my other buildings used blue light.  It’s not a huge variety, but it’s at least a little something, right?

The good news is that it’s terrain, so it doesn’t matter all that much how great it looks.  I do know that it looks good on the table-top, and that it doesn’t seem to show up the surrounding models.  What else can I ask for?

3 comments on “OSL: Let There Be Light!”