It has been some time since any of my local group has played a game of 40k. We’ve bantered about possibly playing a game sometime, and even suggested that we’re overdue for an Apoc game (and, with the impending re-release of the supplement, we’re due to host one).

It’s unusual–at least, as of late–for there to be enough interest, that we decided to capitalize on it and supplant our regularly scheduled board game night with games of 40k. In total, Sam, Brandon, and Simon showed up (a truly unusual cast of characters), and we paired up for games of 40k.

I wound up paired up against Sam and his army of knights. Sadly, I hadn’t made my list yet, and didn’t want to be seen as engineering against him. I also wasn’t particularly feeling like building a list, so I just went with quick and easy…

I didn’t ask for a list from him, but given that he only had five models, I figure I can reasonably piece together what he had. Though I’ve not faced his Armigers before, I’d heard of them and this seems like a logical force that Sam would use on a regular basis. In short, it wouldn’t have taken that much effort me to have come up with exactly what he was playing, should I have wanted to engineer against it.

This was the fastest I figured I could throw a list together. A bunch of Carnifexes didn’t seem to be ideal against knights, but if I could get in close, I’d have a chance. More importantly, it was easy to create a list and it would be fast to play. 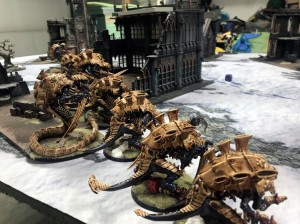 For mission, we rolled up Deadlock–though I don’t suppose that mattered all that much. I was likely to table or be tabled with this mission. There was just far too much firepower out there for me to reasonably survive a gun battle.

I wound up picking sides, and chose the one that should give me the most scoring objectives in my quarter. He wound up deploying most of his units first in the back corner, and I lined up across from him, knowing I had to get a charge off. With luck, he rolled a 1 for first turn, meaning I only needed to roll a 3+ to go first. Sadly though, I also rolled a 1, and then subsequently failed to seize the initiative, commencing the beatdown.

He played well, repositioning his units around the board so that they could have maximum firing opportunities, but also be out of charge range for the most part. I had forgotten just how quick the knights are though, so charge range was a farce.

He opened fire with all of his big guns and only managed to kill two of my carnifexes, despite the hail of bullets he put down. As far as that goes, I was rather lucky with six out of eight models still standing.

The downer was, that all but two of them were wounded–some of them critically. In total, he had done 34 unsaved wounds to my carnifexes before I’d had a chance to go. To put that in perspective, I had a total of 65 wounds across all carnifexes to begin with, so I was more than half dead. Granted, he didn’t scratch the Biovore, and the Mucolid wasn’t even on the table–so there’s always a chance…

He scored a point for killing a unit of mine in the shooting phase, and another for first blood, then passed the dice to me.

I rather like Devourers with brainleech worms as guns. Against this particular foe though, I would’ve been better served with deathspitters.

Devourers at least let me roll a ton of dice, so that’s where I started. There was nothing in range where I could focus fire with all of my dakka-fexes, so I had to split fire. In total, I did ten unsaved wounds spread across two helverins, and then passed the turn back to him.

On the plus side, I did score an objective for Area Denial, and earned three victory points. Of course, with one more decent turn of shooting from him, I would be tabled, so there’s that…

I’m pretty sure Sam felt bad for me at this point. He toyed with me a bit, but I really didn’t feel bad. I know that 10 years ago, I would’ve been livid with the way the game turned out, but I now realize that sometimes you just have to lose.

My army was outclassed, and my dice were cold. You could argue that my strategy was also poor (though in fairness, I’m not sure what a winning strategy would’ve looked like in that situation). Still, I managed to enjoy myself.

We proceeded, but under the assumption that Sam would try to table me on turn 2. In order to accomplish that fact, he would’ve had to be incredibly efficient at killing things, shoot things in the right order, and also have no small bit of luck.

In total though, it didn’t work out that well. He really wanted to wait on his big guy–who was clearly the best option he had at gunning down multiple large models. Still, he had a fine round of shooting, managing to kill all but Old One Eye, a single dakka-fex, and the pesky biovore.

In good sport, he also charged into a lone carnifex and put it down with a warglaive. I had goaded him into charging with a helverin as well, and managed to get Old One Eye to perform a heroic intervention–and subsequently killed that titan.

He managed to pass the turn scoring another objective, and another point. Things were now all knotted up at 3…

My game was clearly over, but I opted for a final “death or glory” style attack. Old-One Eye managed to survive the charge with one wound remaining after overwatch, and then put the smack down on his warlord. Between him and the other carnifex, we managed to do something like 16 wounds of damage in combat, before being utterly stomped to death.

Technically, I still had a mucolid (freshly arrived), a spore mine (from a missed lob), and the lone biovore–but against the full contingent of five knights–hell, even against one badly wounded knight, I stood virtually no chance.

We might have gone into the next turn and let him kill me, but I seem to recall us packing up at that point. Indeed, it was a forgone conclusion.

No, I wasn’t tabled by turn two (how cool would that have been), but I was effectively tabled. I would’ve faired much better with little gribblies in my force. Tyranids though, are just a bad match-up, I feel, against Knights. We don’t have much (if anything) that meets the definition of a lascannon (ie. Long range, d6 damage, high strength). The only gun in the book that seems to match is a Tyrranofex. Sure, I could field one of those, but we’re talking max three per army, and I’d just get gunned down.

Instead, I think, to deal with knights, I would need to go small and fast. Single wound models, and small units.

It doesn’t help that knights have so few options that Sam’s casual game lists are identical to what he’d bring to a tournament (actually, one could argue that they’re nastier, as he says he doesn’t play with carapace weapons when using points–but throws them in for free in power level games). I don’t accuse him of cheesiness though–he doesn’t have many options, and he was already giving up a few extra power level, so taking a carapace weapon seems fair.

I was clearly outclassed, brought the wrong army, had cold dice, and was outplayed by a superior opponent. We’ll have to try that again sometime with different lists…