I have a nasty habit of buying things I don’t need.

Ok, all gamers seem to suffer from similar afflictions.   I’m not sure my disease is any more acute than yours; however, I do find myself buying things that I have absolutely not intention of ever using–so I’ll let you decide if I have it better or worse than you.  What I mean by that is, if I find a good deal, I buy it.

Generally speaking, people in my area seem to sell out of armies with likely the same regularity as they do where you live.  We live in a city of roughly 300,000 people, and I’d say there’s a reasonable market for Warhammer.  The one thing that I can’t fathom is that the resale market here is in the pits.  I’m not sure why, but nobody seems to really want to buy used models in my neighborhood.

Functionally, that really sucks if you’re trying to sell figures, but it’s awesome if you’re in the market for stuff.  Frankly, I have too many models, and I shouldn’t be in the market for anything; however, when armies are going for 80-90% off MSRP, I can’t help but jump in.  My thought process is that, at that rate, I can justify parting things up and selling them on Ebay.  Historically speaking, I’ve generally made between 40-60% of MSRP when selling things on that site, so with enough volume, I can justify storing these things for a while.

The downside is that I just sold a bunch of crap on ebay earlier this year.  It actually got the point that I could see the workbench in the garage.  I’d like to keep that going, so I plan on selling these things in the near future.  So, if you have an interest in any of the things listed here, hit me up and we’ll chat.

For prices, I generally stick things up on ebay for $.01 and let the market determine the price.  If we’re negotiating outside of that, I generally look up sold auctions on ebay to get an idea of value and set the price from there.  Keep in mind that I’m going to likely pay about 13% for ebay fees, so you can get that kind of discount at least.  Care to work up a deal?  Make an offer and these can all be yours!

Please forgive the giant image dump.  You should be able to click on any of the photos for a bigger version of each. 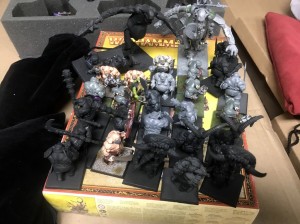 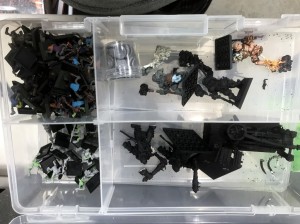 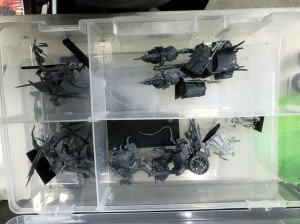 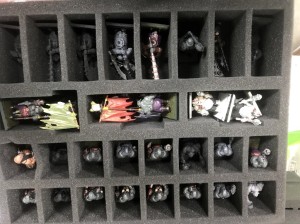 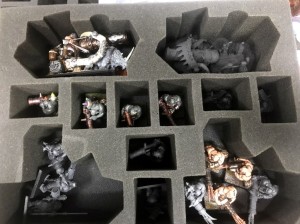 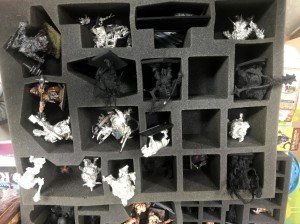 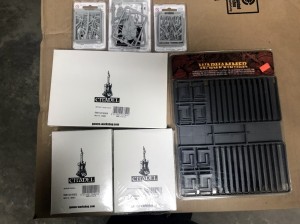 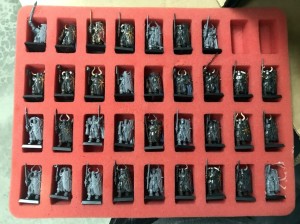 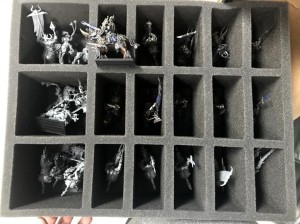 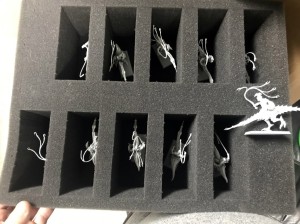 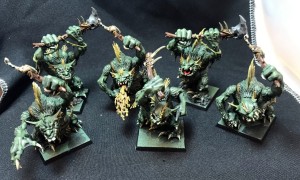 I’ve been quiet as of late, but with the release of the new Gloomspite army book for Age of Sigmar, it’s time for me to start cleaning out the old garage. For those of you long time readers, you may recall the massive commission painting experiment I underwent a few years back with night goblins. In total, I had 800ish goblins to get painted, but that eventually fell through the cracks.

I don’t have any real intent to ever go back and paint these, or even to play Warhammer Fantasy again, so now is as good a time as any to get rid of them.

My loss is your gain. Right now, you can find all sorts of goblins for sale: night goblins, fanatics, spider riders, trolls (both river and stone), an arachnarok, snotlings, pump wagons, wyverns, etc.

For those of you newfangled folks, that means Gloomspite gits, spiderfang models, troggoths (fellwater and um.. stonecut?). Clearly, I don’t know all of the new names. 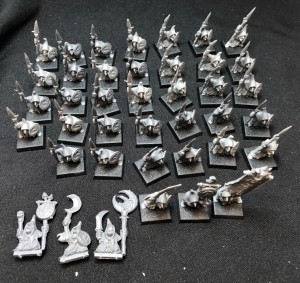 You can view them all on ebay at the link below:

To make things palatable, I didn’t put all of the auctions up this week. Let me be clear though, this is most of them, but I’m holding back at least a few for the next iteration. With this in mind, if you’re looking for something, feel free to shoot me a message.

Most of what I have in reserve are blocks of 40 goblins with spears, or 40 goblins with bows. I also have some more of the Battle For Skull Pass teepee’s as well, plus some older 4th edition era goofy goblins and doom divers.

Otherwise, please go check out my auctions on ebay and see if there’s anything that tickles your fancy!

I had a list of auctions available on eBay the other week, and some of the folks asked about what else I had available.  Specifically, I offered to take pictures of what I had that was still in the blister.

So I took some time this weekend to snap a few pictures of what I had in the garage.  This was the stuff that was easy to get to (and is therefore, the likely stuff to show up in the next round of eBay auctions).  If there is something else specific that you’re looking for, shoot me a message and I may have it as well.  I know I have some Orcs and Gobbos stuff and Chaos stuff for fantasy, a copy of Space Hulk, and some IG stuff that’s new on the sprue.

So, in order to appease those folks interested, I took some pictures of the models I have in the blister and uploaded them to the trading page.  Don’t let the page fool you though, I’m not terribly interested in picking up more stuff–I’d much rather sell things than trade them.

As far as prices go, I’m going with the “make offer” strategy.  Anything reasonable should fly–and by reasonable, I’m going to look at completed auctions on Ebay for models in similar condition.  Otherwise, I’m just going to throw them up on Ebay for $.01 and let the market dictate the price.

If you’re looking for interesting things, I’d encourage you to go take a look.  There’s close to 100 blisters available there, containing mostly Space Marines, but there’s a mixture of Terminators, Characters, Limited Edition models, Sisters of Battle, and even some Fantasy stuff.

It’s not all that often that you get an inside scoop on ebay sales, so I figured I’d let down the veil a bit.

Granted, I won’t go too deep into things, as ebay has changed significantly since my last round of sales.  For that, I’ll save a future post for griping about the changes, but until then, let’s just take a little peek behind the curtain.

From an ebay’s seller dashboard, I get to see a list of all of my items along with how many times they’ve been viewed, bid on, and how many watchers each item has.  Of course, it also includes a current auction price.

I used to get worked up about auctions when the numbers were low, but I’ve since found that the only thing that really seems to matter is the number of people watching a particular item.  Having a high price at the beginning can be either a blessing or a curse for sellers, but the one constant that I’ve seen is that auctions that don’t have many people watching them, tend to sell low.

In that regard, this isn’t an altogether magnanimous posting.  If I alert you to the items that I think are going to sell cheap, you’ll bid them up a little higher and I make a little extra money.  Make no mistake though, I don’t think these will skyrocket, because there just isn’t an overall level of interest to make them expensive.  So, I look at this more as a way to reward followers of the blog.  If I have to sell something cheaply, why shouldn’t it be to someone who reads the blog?

With that side, these are the auctions I have with a disturbingly small number of watchers:

These are older metal models, so maybe people aren’t all that interested in them.  They’re not 2nd edition era, so there’s no real collector value that I know of (though they are at least in the blister still).  I suspect these also have fewer watchers because they were bid up fast and early, so paying $12 for the lot is already fairly reasonable.

I’m not sure why these are low.  Six watchers with the auctions half over is a bad sign.  I think they’re missing an arm or two each (or maybe I’m just overestimating the number of appendages on an ork ‘nought?).  I would figure that these should fetch a higher price since it’s so easy to make replacement parts for ork vehicles out of plasticard.  Right now, this is my guess for biggest steal of an auction.

This isn’t too surprising because the front picture only has two models when I have 25 in the lot.  Plus, I don’t have any more warmachine stuff, and I really know nothing about them, so I don’t know how to advertise them.  Again, I suspect this will go relatively cheap for what it is.  I can’t say what that means though, other than to say I’m sure I paid at least $60 for this stuff.

I don’t think anyone really plays this specialist game, and even if they do, who is after Quovandius?  He’s some sort of mutant, but if you’re in the market for a 54mm figure that looks kind of silly, he’s your guy.

Whatever the case, I expect at least some of these auctions to go cheap.  Best of luck to you in getting a steal….

Check out the rest of my auctions here 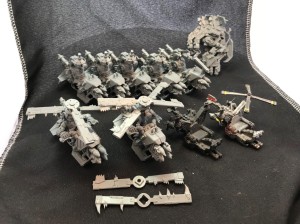 My garage is just too full of stuff and I am in desperate need to clear some of it out.  That’s where you come in.  Are you in the market for some space wolves, or orks?

If so, you’ve come to the right place.  Rumor has it that both are due for new codices in the immediate future, so hop on the bandwagon and get them in advance.

Right now I’ve a lot of space wolves up that includes a dreadnought, a stormwolf, termintaors, and a bunch of power armor marines.  Minimum bid opened up at $.01. 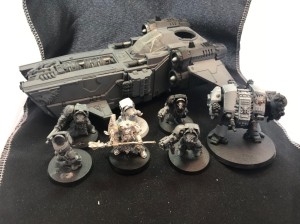 The bad news is that it’s nowhere near that cheap anymore, but the good news is that, as of the time of writing this, it’s only up to $73.  Heck, the Storm Wolf retails for more than that.  So, look at it this way: buy a stormwolf and get 28 space marines a dreadnought for free.

I’ve also got quite a few auctions for greenskins up for grabs.  There’re 16 auctions of orky goodness, including some of the more interesting:

Like I said, there’re a bunch more options.  I dare say there’s enough for a complete Ork army there. So what are you waiting for?

Please check out my ebay auctions