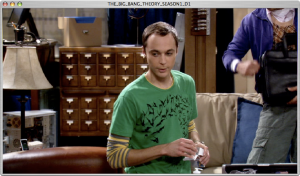 I haven’t been doing much in the realm of gaming as of late (you can probably surmise that from a distinct lack of blog posts).  I chalk this up to various reasons, but ultimately, I hope to get those handled before too long.  So, with my lack of time spent gaming, I find my fingers wandering over to eBay in order to fuel my fires.

One of the things I’ve been envying for over a year now has been the card catalog in the background set of the Big Bang Theory.  If you don’t know what I’m referring to, there’s a picture to the right depicting it.  If you still don’t know what on Earth I’m talking about, you’re probably a child of the 90’s (or later), and have never seen one before.

That’s partly why I wanted one: these things are relics that are quickly disappearing from the world.  They make nice conversation pieces, and can actually be quite lovely.  Plus, they double as nice places to store crap.

As I said, I’ve been searching for over a year now, and they’re seemingly completely unavailable here in Alaska.  The municipal and school libraries deprecated their use more than 10 years ago, and the few that they do have in storage literally take an act of the Mayor to get released.  The only time that happens is once a year there’s an annual auction for “Friends of the Library” wherein they sell one to the highest bidder.

I was in attendance in April, and was willing to pay as much as $900, but it quickly shot up above my limit, and finally rested at $1600–which was far too rich for my blood.  While I wanted one, I just wasn’t willing to pay that.  I knew that they routinely sold for $500 (or less) on Ebay, and you can also find them from time to time on craigslist, so I was content to hold out.

The problem is that even at those prices, you still have to figure out how to ship a massively large (and heavy) piece of furniture from wherever it is, all of the way up to Alaska.  That, in-and-of-itself, is easily going to cost $500 at least! (For the record, I’ve been quoted as high as $1400 before).

Well, I’ve had a saved search for nice looking catalogs that came up on ebay, and one showed up last month.  I contacted the seller to ask him if he’d be willing to ship to AK, and got back a reasonable (*cough*) shipping estimate so I decided to bid.  The thing is, once I saw the photos of this particular catalog, I knew this was the one I was going to win.

After scouring the internets for a nice looking piece, I’ve seen a lot of real dogs.  This one wasn’t just a cheap piece of plywood: but a real antique–in fact, it’s from the early 1900’s (the latest date inside the drawers is 1908).  It’s definitely old, and while it isn’t 100% original, it’s pretty darn close.  After purchasing it, it only took about a week to arrive, and we carried the behemoth upstairs and put it in the loft.

My intent is to store my magic cards in it (though, I know I don’t have anywhere near enough cards to fill it up, and hope never to do that).  I just need to find the time/gumption to do that.

I do wonder though how this affects my hobby goals.  In case you aren’t already aware, I have a set of Frugal Gaming Goals each year that I try to achieve (essentially, I’m trying not to spend any actual money on gaming).  My question is this:  Should this count against my goals for the year?  Realistically, the intent is to put my cards in there, but it’s also a piece of history, and something that I intend to give to my children one day.  Can that really count against gaming spending?  Should I put some or all of it against my total?

If you’re curious, the final auction price was $1325.00 and shipping was actually $558.12.  In addition, I’ve also purchased some dividers to help organize the drawers for a total of $96.07.   My YTD Frugal total is $1,598.29, so if it were all to go against my gaming spending, it would put me in the red for the year–with no realistic expectation to come back from that.

What do you think?

9 comments on “I Purchased a Card Catalog”