We recently convened the latest edition of MTG: Draft Night at my place, wherein we unveiled Unstable upon the masses. Prior to going in, we tend to vote on what it is we want to do and then start knocking them out. One of the higher vote-getters last year was the latest UN-set, despite having a stable of some relatively competitive players. I think they were a little leery about the set in general, but majority rules, so that’s what we went with.

When establishing an agenda, we tend to basically price things out at the cost of splitting the packs plus some misc. leftover for food. I generally try to stay true to the budget so, depending upon how much we have left, we may go fancy or basic for a meal. We’ve done things like a full turkey dinner with all of the trimmings, french dips, philly cheesesteaks, steak dinner, and we’ve done our fair share of pizza as well.

With unstable, and the increased value of the basic lands though, I didn’t know how to divvy those up. I suppose we could’ve left them in the pack and drafted them–or maybe just allowed everyone to keep the lands they opened, but that could get weird if anyone opened a Steamflogger Boss. To nip any issues in the butt, I came up with an arbitrary price for people to pay that came just shy of covering the pack prices, and then paid for the food myself.

I basically looked at the buylist prices of the lands and cut the expected value of the packs by that. That worked in general, until two people bailed on us within the last couple of hours before the draft. It wasn’t horrible because we frankly had too many people anyway (12). While that may work great at a store, 12 is just a lot of people to have at my house, having to worry about food, pairings, and entertainment. With it down to 10, that was more manageable, but then I’m stuck footing the bill for the rest of the packs.

Luckily, we’ve a good bunch of guys in the group and they pretty much all pitched in and helped cover the costs of the additional packs.

Rather than break down each game/deck individually, I thought I’d cover a few areas in detail: preparing for unstable, my deck, and the winning concept.

Going into it, I wound up doing quite a few practice drafts online using Draftsim (a site I’d never used before, but no sites I’ve used before seemed to include Unstable). As with all previous sets, I sent the information out to guys ahead of time, and I opted to make use of it.

During various iterations, I found myself liking all of the colors in some combination. Initially I was drawn to contraptions, so red/black looked solid. Sure, green/black had more contraption enabling arguably, but the black contraption stuff all looked like solid 2 for 1’s. Eventually I morphed into black/blue, which also had solid removal in both colors, and made for great control decks. By the time I was ready to draft, I kept finding myself going with white/green Host/Augment.

Fundamentally I know that host/augment is bad. I look at augment as a limited “enchant creature” that only goes on some creatures and doesn’t stack. It’s a great way to set yourself up to be the victim of a 2 for 1 too. Still, I liked the crocodiles for mana acceleration, and figured I could splash whatever I wanted if I could get enough of them. Whatever I played, would depend heavily upon what cards got passed my way though. 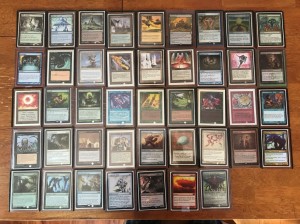 One thing I knew was that I had to prepare for the off-the-wall cards like Spike, Tournament Grinder; Summon the Pack; Hangman; and Modular Monstrosity. For each of those cards, I worked up lists to use. Also, given that the rest of the folks in the group wouldn’t have all have prepared for them–and many of them don’t own the cards necessary to make Spike effective–I made those lists/cards available to everyone. Sadly, there were no Spikes drafted. For the other three, we had one of each included, but only the Hangman actually ever made it to the table. And then, he chose completely BS words like “MYRRHY”.

When I faced it, I assumed he was likely to choose a word that didn’t have normal vowels, so I chose Y first. I couldn’t come up with what it was, and quickly came to the conclusion that the word was made up. Technically he was correct–it’s real (meaning: “resembling the characteristics of myrrh.”) but literally no one has ever used that word in conversation.

It was in good fun though. Though I didn’t get to draft any of the cards I prepared for, I did get to steal his hangman and use it against him. The word I chose?

He guessed it in something like 12 tries. It got up to an 8/8 before I pushed my luck too far and he died off.

For the format, we opted to mix that up as well.  In the last draft, we only wound up playing against a handful of opponents (some as low as 2-3 games).  To remedy that, we opted this time to play one game against each person there.  To reduce the problems of mana-screw, each player could look at the top card of their library before taking an optional free mulligan.  That was nice, but it still didn’t work out great.  Several people still lost to mana-screw.  I’m not sure how you’d fix that though, but at least we all got to play against each other.

When it came to drafting, I did wind up going with Host/Augment. I knew it was bad, but still, I just couldn’t pass all of those pretty crocodiles. It wasn’t until the third pack that I knew it was open, and my biggest mistake was not drafting good bombs in other colors earlier as I was likely to be able to go 4-5 colors. This is what I drafted:

My draft wasn’t bad overall. I’m sure I made some mistakes, but the cards in the lot were fine. The big problem I had was that I had no idea how to construct the deck. The vast majority of my cards were in four different colors, and had casting costs of 5+. I also had a bunch of hosts and augments, but I also wanted to play with critters that didn’t augment. I also had cards like the Proper Laboratory Attire which would likely be good, but I didn’t think I’d be able to cram it in. Plus, with so many crocodiles, how many land did I really need to run?

I took about the longest to build my deck because of these questions, and figured I could tweak it over the night.  Sadly, after my first iteration, I wound up misplacing my sideboard and never found it again until the night was over.  So what I played with looked like:

The deck ran super low on lands, thanks to the lizards, but didn’t have any great over-the-top solutions.  In the 9 games I played, I only once cast the Rules Lawyer (in a game I was already winning).   The deck would generally put a ton of land into play and then not do all that much.  It faired relatively poorly against aggro decks, and did only ok against control.  I wound up winning only 4/9 games, beating down a couple of the newer guys and one of the best players in the group.  I got mana-screwed twice, but those were largely my fault.

Clearly I should’ve been running the Hydrodoodle main-deck to make use of all of that mana, and it would’ve helped tremendously had I had some more punch, or even more control.

The long and the short of it is that this is the worst I’ve done in any draft.  I chalk it up to a poor draft strategy (inherently augment is a weak ability); bad deck construction; and probably some poor play as well.  It was definitely not one of my bright moments–though I did still manage to have fun.

Before I begin, I should say that I do not do Sam justice.  He’s got a live fast / take chances mentality that causes me to overlook just how brilliant he can be.  During the draft, he did just that.

I sat next to him the entire draft, and he started table-talking (not against the rule in our casual format), about how amazing Bumbling Pangolin was.  Granted, I knew the set had a fair number of artifacts, so it wasn’t horrendous, but at a base, a 2/2 for 4 in colors that don’t really support augment well isn’t ideal.

How wrong I was.  Sam’s ingenious deck coasted him to an 8-1 finish (and, from what I hear, that one loss was close).  His deck revolved around getting a number of contraptions out and then dropping pangolins–then winning.  He had a few good contraptions, but the real game winners for him were the silly cards that nobody wanted.  Cards that would exist until the 10th or higher picks were his bread-and-butter, like “Auto-Key.” 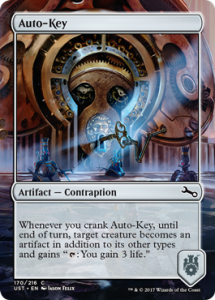 Whenever you crank Auto-Key, until end of turn, target creature becomes an artifact in addition to its other types and gains “{T} You gain 3 life.”

He’d throw out a contraption and then about every three turns, drop a pangolin after turning your best critter into an artifact with a nearly useless effect on it.  He also played white/red, so he snuck in a couple of ponies for bouncing as well.

When he played my deck, he managed to pangolin five different critters before crushing me.  I was just starting to stabalize the board, but was completely flattened by a prehistoric relic.

Kudos to Sam for coming up with the winning strategy–something that I haven’t seen or heard of anywhere online.   Rankings for this event go a little something like this:

Overall, it was a great set, and a great group of guys.  I’m already looking forward to the next draft night…