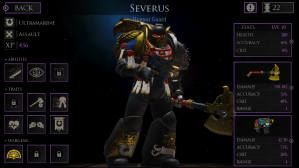 I don’t play video games much anymore. Back in the 80’s, I got fascinated with games like Wizards Crown & Phantasie on my Apple IIe. Later, in the 90’s, I got a 486 and played the hell out of games like Warcraft II, Quake, and even Duke Nuke’um. That eventually lead to the monstrocity that is Everquest. That game single-handed sucked away the better part of a few years of my life and caused me to swear off MMO’s completely.

Well, sort of. I held WoW off for a year, but eventually caved. I also played some City of Heroes and Warhammer: Age of Reckoning before remembering of my lack of self control.

It got bad for a while on my phone as well. Phone games are generally quick to play, but they’re always with you, so a couple of years ago I decided to delete all of the games off of my phone to increase my productivity, and it’s helped out.

Well, back in September, I went to a conference out of town that involved 14 hours of travel, so I figured I’d splurge and throw a game on my phone. The game I chose?

I actually dabbled in this game on my ipad when it came out, and it was ok, but after making it through eight or so missions, my first character died and I gave up on the mission, ignoring the clearly worded prompts that everyone would lose all of their XP (which I hadn’t spent at all). That was enough for me to swear off the game entirely.

But, since I had plenty of expected downtime, I figured I’d give it a shot again.

That was a mistake.

The game was fine. I don’t know that it’s amazingly rich, mind you, but I enjoyed playing it. I’m probably not the best person to review a video game, based upon my relative inexperience as of late, but it got me hooked. I wound up playing the entire thing through on all three difficulty levels.

Spoiler alert: it took more than the plane ride to accomplish that. In fact, it took both plane rides, a significant amount of evening time, plus even some time after I got back home.

I even got to the point where I started farming XP, and trying to get new packs of cards, in order to unlock the tier four Ultramarine characters.

Before you ask–yes, I considered playing with other chapters. Heck, my core team through the first playthrough consisted of two Space Wolves, two boys in blue and a Blood Angel. The thing is, once I started unlocking tier three Ultras, they all had abilities that were boosted by having more Ultramarines on your team.

That, coupled with the fact that Ultramarines are just cooler in every way, secured their spots on my roster.

No, seriously. The Space Wolves seem really good, and there is some great gear for the Blood Angels, making either of those (or a mix of the two), fairly compelling. I just happened to get a bunch of good Tier 3 Ultras available to me before the others appeared, so I went with them.

I found the first playthrough quite interesting. I was shocked (and scared) when the big bugs started showing up (nothing was as terrifying–or as difficult–as the Carnifex). Though the game had limited options, they did a good job on story/mission design to help me believe it was more than just “kill more bugs” every time. There was a mix of:

Enough, at least, to hold my attention. When I got to the “grinding” stage (not required, but I opted to do it in order to level up some of my Tier3+ characters), I would’ve liked to have seen an “endless waves” style mission where you could just kill things and earn experience, making it progressively harder. As it was, my preferred mission for XP was Mission 2-2 (I forget the name and have since uninstalled the app from my phone, but it’s the one where you need to plant two bombs to blow up the bridge). My preferred mission for griding out cards/packs was the one where you slay the Broodlord, as I could do that fairly consistently with one shot from my Heavy Plasma Gun.

Overall, I think it was a fun game and would recommend if you have a signifcant amount of downtime. I can’t say it’s better or worse than other games, but if you’re at the point where you’re grinding XP, might I suggest going out and seeing the sun? Spending time with your family? Hell, anything else…

I can’t imagine that there is that much development for this game, since it’s free and pay-to-win. But if there were, I would hope for the following changes to the game: