Though the blog is primarily focused with 40k and all things Games Workshop, game night around my house is anything but.  In fact, because we often have odd numbers of players, people that don’t bring armies, or just attendees that don’t play 40k, we more often than not find ourselves playing board games.

For those wondering, this is the number one reason why I struggle to get in 12 games of 40k per year.

Many in our group are big fans of Star Wars, playing games like Star Wars Destiny, X-Wing, and Armada.  I’ve dabbled in a few of those, but never actually purchased any of them (I figure I have enough sunk costs in 40k and Magic: the Gathering to justify playing yet another massive money sink.)   Well, one of them also went out and purchased a copy of Star Wars: Imperial Assault and even went to the trouble of painting it all up, so that naturally inspired a group of us to start playing.

If you’re not already familiar with the game, it’s a tile based board game along the same lines of Descent, set in the Star Wars universe.  If you’re not familiar with Descent, you can think of it as D&D: the board game.  That’s an overly simplistic view of that game, but I think it does a reasonably good job of encapsulating the premise.

The game walks you through a campaign of mission wherein you must achieve some sort of objective within a limited amount of time.  Your band of adventurers scurries through the mission, killing bad guys, interacting with various objects, and advancing the overall story line.  Most people involved play on a team together as various rebel fighters chosen from pre-built characters within the box.  Our team consisted of:

You’ll have to forgive my lack of knowledge of the Star Wars universe.  Obviously, Mak’s official race is not listed as “Cat” (in fact, they don’t list the race on the card, so I don’t know what he is, but he certainly looks like a cat).  I played the wookie (which I affectionately referred to as “Groot” through much of the campaign due to the unfortunately positioning of a nearby Guardians of the Galaxy themed Lego mini-figure).

I’ll try not to give any spoilers of the game or how it played out in case people are interested in finding out for themselves.  Instead, I’ll just go into some of my thoughts on the whole endeavor. 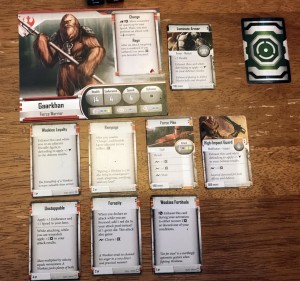 The game is quite fun, and plays very similar to what I remember from Descent.  As with Descent, I think that a clever overlord (or Imperial player, in this instance) has the upper hand, and if they’re particularly devious, they can crush the rebels without too much hassle.  It’s not as exaggerated as it was in Descent and–truth be told-the rebels won most of the games (to the frustration of our Imperial player), but I look at that role as one of a dungeon master who is facilitating the players having fun themselves.

One area where it was drastically different was with the time limits.  Descent doesn’t really have timers in it (at least not the original version of the game) other than the overlord builds up enough threat to do some really nasty things.  Imperial Assault would have hard timers on most of the mission, which meant that you always had to be moving forward.  We lost several of the early missions because we weren’t constantly pressing forward.  Heck, we barely won some of the missions where we spent the entire time sprinting towards objectives.  Make no mistake about it, movement is highly valuable in this game.

The campaign is well done and setup so that the next mission is determined by who won the previous mission, and each side gets benefits that vary based upon who won or lost and how quickly that happened.  There are a number of side missions that are available for both the rebels and Imperials to choose, so I would guess that the replay ability of the game is pretty high.

Our campaign took the better part of a year (maybe even longer) to complete from start to finish, but that’s only because we didn’t make it a priority.   The game didn’t show up every week, and we basically only wound up playing it on weeks where the dedicated players showed up and basically nobody else did, and on nights where we didn’t want to play 40k or some other game.  There was a little flexibility with characters, as some of the guys that don’t show up quite as routinely wound up effectively sharing a character through development, but we really tried to stay true to a core team of guys.

Everyone really enjoyed the game (Again, except the Imperial player at times), and the campaign was good fun.  However, I would not do it over again–at least not the same way.  The campaign took forever to finish at the rate we were playing and wasn’t satisfying with long gaps between games.  I would certainly play another campaign, but only on the condition that we set aside a defined group, place, and time to meet to get a regular campaign moved through expeditiously.

I’ve also posted pictures of our finished characters on this post for posterity’s sake.  We found that the game was incredibly hard at the onset, but then levels started to get considerably easier as we leveled up and acquired new gear.  Mak turned out to be the all-star of the group as we found his stealth suit and got him what appears to be the best gun in the game.  In the end, Gideon (the support character) wound up winning everything for us–which I was especially pleased with, seeing as support characters rarely get the glory.

If you’re considering playing this game, and someone already owns it, I’d say it’s a no brainer.  If you have to go out and purchase it yourself, I could think of worse things you could spend your money on.  If you’re a star wars fan, this is probably a must play though.  I don’t have any official rating system on the blog, but I’d say it’s worth the price of admission…