Unlike when I’d written my previous review on Hive Tyrants, I have gotten a game of 8th edition in by the time I wrote this post so I do have a little more context about how things work.  I had originally planned to write these reviews in the order in which each unit appears within the index, but since I haven’t played with either the Swarmlord or Old One Eye yet, I’ve opted to skip ahead to the Broodlord.

Sweet heaven: how great it feels to compare a traditional statline against the previous edition.  Unlike the old Monstrous Creatures, the broodlord has a simple, consolidated statline that doesn’t change throughout the course of the game.  From what I can tell, they went with this approach with models that have less than 10 wounds.  At least it makes it easier to compare!

Easier yet, none of his stats were strictly reduced, and almost half of them improved in some way.  He’s now faster (+2″ move), hits more (hits everything on a 2+), has twice as many wounds, and 50% more attacks.  There’s no doubt about it, his stats are better across the board.

Of course, one might complain that his wounds characteristic is a little light.  Previously it took at least three lascannons to do him in, whereas he could now theoretically die to a single lucky shot.  Conversely though, he’s also more durable versus medium arms fire.  It’s hard to quibble about this though.  Depending upon what kinds of armies you face, twice as many wounds may not be seen as a buff, but I think it’s hard to say that it’s a nerf.

Many of his abilities are similar to the those of the Hive Tyrants and were covered in the index overview so I won’t go into too much detail on them, other than to say that he is now considered a synapse creature so he now benefits from Synapse and Shadow in the Warp.  That’s helpful to give another option for synapse in the force (which, by the way, is a much bigger deal than I had originally expected it would be).

Lightning Reflexes simply gives him a 5+ invulnerable, which is fantastic and something that the army has needed for a while. 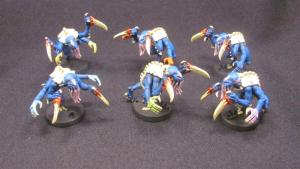 Swift and Deadly gives him the ability to charge even if they advance (Aka. “run” from the previous edition).  With the added 2″ of movement, this puts his threat range somewhere between 11-26″ in a given turn.  That’s a pretty huge range, but remember you’re rolling 3d6 in there (one for the run and two for the charge).  Though it can vary wildly, you can be relatively certain of getting a reasonable total distance.

If you reference something like the Dice Probability Charts from the Dark Fortress, you can see that there’s more than a 90% probability that you’ll roll at least a 7 on those three dice, practically guaranteeing you a 15″ threat range (reminder: in 7th edition, his threat range was a maximum of 18″).  Undoubtedly, he’s going to see more combats, and do so at a much quicker pace than he did in any previous edition.

Lastly, he benefits from Brood Telepathy, which grants +1 to hit rolls in the fight phase for genestealers units within 6″ of him.  This specifies that they must be <HIVE FLEET> ‘stealers, so it does mean that he doesn’t buff nearby Purestrain Genestealers from any cult lists (and vice versa for the Patriarch).  Though I’ve heard that GW has ruled in Age of Sigmar that “a model is always considered to be within X” of itself,” the Broodlord does not derive much benefit from this rule as he’s already 2+ to hit in melee.  I suppose though, it means he ignores base modifiers against this roll.  It does help for

Gone are the options for unit upgrades–broodlords now come with Monstrous Rending Claws and that’s it.  It’s not like they had many options for upgrades before (and those that they had options for were all overpriced), but I’m sure someone could have heartache over a lack of flexibility.

What they lose in options they make up in killy power though.  Their default (and only) weapon option comes at their own base strength, -3 armor modifier and does D3 wounds.  Furthermore, on a “rend” (a term I carry over from 7th), it goes to -6AP and increases to a flat damage of 3.

The only real downside is that he’s swinging at strength 5.  What this means compared to last edition is that he’s wounding toughness 3 models on 3’s instead of 2’s, so that’s a bit of a bummer.  He’s not ideally suited to beating up weak models though, so he should generally avoid such combats–and he can’t be tarpitted by them in this edition, so that should have minimal effect.  He’s also rolling a 5+ to wound anything from toughness six through nine and only wounding toughness ten (or more) on 6’s (if there is even something out there that tough).

So, against all various ranges of toughness–except toughness 3, he’s wounding as good–or better–than he did in the previous edition.  His claws also give him the ability to re-roll failed rolls to wound (though I completely forgot about that in my first game with them).

Yup, I have no complaints about that weapon in assaults…

We have a big difference here.  In the last edition, he was a unit upgrade and ran 60 points.  Genestealers themselves were pretty bad, so you could look at the 70 points you spent on a base unit of them as a tax to buy him.

Event still, at 162 points (the weapons are free!), he’s more expensive this edition.  It’s not fair to compare him against the 130 point unit of him plus the ‘stealers in the previous edition because they did lend him ablative wounds and additional rending attacks.  Undoubtedly, he’s pricey in this edition.

He’s still a psyker and knows one power, but that power doesn’t need to be “The Horror” as it was in 7th.  It’s not a bad option for him though as it gives him (and any nearby units) potential survivability by reducing an enemy’s to-hit rolls by 1.  He could also go with Onslaught (which provides literally no benefit to him or nearby genestealers, but could be used as a forward node of it in an assaulting army), or with Catalyst for a little extra durability.

He’s also retained his character designation, which seems to be more of a benefit than it was in the previous edition.  He can’t be singled out in a challenge, and also can’t be singled out by weapons that aren’t snipers unless he’s the closest unit, so being a character now just gives him a little extra durability.

The biggest “other” change is really his shift in the Force Org chart.  Previously, he just tacked onto a troop unit, but that doesn’t make much of a difference in this edition.  I’ve seen people complain about other units (particularly the Malanthrope) about switching to an HQ, but frankly, I don’t’ see that as a downside.  Multiple HQ’s are required to fill out a Battalion Detachment–which is the quickest way to earn additional Command Points.  Additionally, with new detachments like “Supreme Commands,” you have ways of fielding a large amount of HQ’s very easily with no downside.

All of these are positive changes.

His new and improved statline turns him into a real beat stick in this edition, plus the addition of synapse allows him to help support the rest of your army.  Clearly, you’ll want to run him along with genestealers–since he provides additional benefit to them–but you could also wind up running him with raveners or other fast moving units as another means of synapse.

The only downsides he has now are his higher point cost, which can’t be overlooked.  He’s competing with the big boys now in cost and is relatively fragile for what you’re getting; however, if you lean on the fact that he is a character and can benefit from the protection of nearby squads, he’s likely going to be fairly durable.

I see him being run as a forward bastion of synapse (and whoop-ass) that really should be hanging out by genestealers (possibly in large blocks) and likely hormagaunts (who are cheap wounds and can practically keep up with him as he runs across the board).

P.S. Don’t make fun of my tiny broodlords.  I’m working on them!