Can it be?  Am I really done with this series?  It seems like I’ve been working on these guys forever, though I didn’t really start on them until January.  So, in the matter of three months I managed to paint up all of the figures in the board game (well, excepting the last few that are still outstanding: dogs & helpers).

This is another one of those generic models that I avoided because I’ve never seen her used and because she frankly didn’t interest me.  The end result turned out pretty well though, but nothing in particular was overly complex or notable.  I like how she turned out in her human form.

Her zombie form, however, leaves a little to be desired.  In particular, I don’t like the way her shirt turned out, but I told myself that it didn’t matter because I was so close to finishing and she would rarely hit the table anyway. 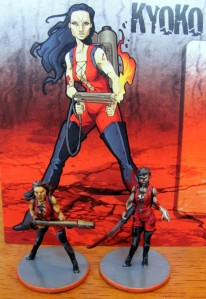 Speaking of unhappy, Kyoko fits that bill perfectly.  I think this is actually the model I painted instead of Maddie back in the day,  The model is obviously Asian in descent, but the artwork is a bit stylized and looks more alien than human.  I tried to paint her more Asian (read: use more yellowsin the skin tone), but it didn’t come out that well.  There’s no mistaking her for another figure on the board, but the tone didn’t work out.  Likewise, the skin tone of her zombie figure is off, but I do like how it turned out.

I also rushed her red because, like above, I was ready to be done with the lot.  Keep in mind that I painted her a full five figures before, so that tells you how long I’ve been agonizing over finishing the lot.  It’s no surprise that she didn’t come out as nice as I’d hoped, but I have had friends tell me specifically about this figure that she looks pretty good, so maybe I’m my own worst critic…?

I ended things up on Amy because she was pretty easy and I think she might be one of the core characters.  Plus, with the fishnets, she’s easy, but has a little uniqueness to her that made it a good finishing model.

I avoided her throughout the time because, well… I don’t know.  Maybe the issue was that she has that pasty white skin and I didn’t know how to pull it off (what I ultimately did was a mix of bleach bone layered up to pure white and then used a purple wash–vaguely reminiscent of the old GW cultists).

For fishnets, my micron pen had died on me earlier in the process, and though I knew I could just go buy another, I made due with what I had (which was another Micron 05–roughly twice as big as the fine detail one).  The lines are relatively straight, but are far too big…

It’s better than what I did with the zombivor–I messed up her tights in several spots where the lines just jumbled on top of each other.  It doesn’t look too far out of place though because she’s a zombie and they weren’t in good condition on the original figure…

So, it’s great to be done, but I’m sad to realize that I still have dogs and helpers to go.  In order to meet my original deadline, I have four days left to knock out six dogs and eight helpers.  That’s pretty aggressive (especially considering that I have a dentist appointment and an after-hours meeting, plus work all four days this week), but I’m still optimistic I can meet that deadline… wish me luck!