So I don’t write about Magic much, but that’s because I don’t deal with it all that often.  I do buy it (more often than I should), but I almost never get to play it, and I rarely sell anything, so what’s there to talk about? 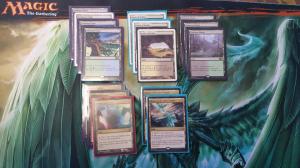 Well, recently I joined a local facebook group for players.  It’s a little bit of everything, but it seems to mostly be used to buy/sell/trade.  I’ve put out a few offers, but nobody seems to be willing to ship, and I’m too lazy to drive across town to buy a $4 card, so they’re mostly misses.  I did wind up talking with a guy about his cards, because he was selling a large lot and seemed willing to go through everything to build common/uncommon playsets for me (which is really what I’m after, as it allows me to spend a minimum amount, but still have enough cards to essentially make whatever decks I wanted).  While I was at it, I asked him for a bunch of cheaper rares, as he was willing to sell them for less than TCG low (which is like an internet standard for pricing).

Anywho, what started off the conversation was that he was selling fetch-lands in a lot for a reasonably good deal.  Normally I don’t buy magic cards as an investment, but I keep reading too many blogs/posts on MTGFinance to stay out.  So I bit on:

In total, that came to $150 (the cheapest I can buy them on TCG today is $233.16).  They’re all in good shape, so I figured what could it hurt?  Then, when I picked them up, he was supposed to have picked through for the playsets and some other cheap rares, but that didn’t pan out.  He decided to go through and do it again and I’d meet him the following week to pick up my stuff. 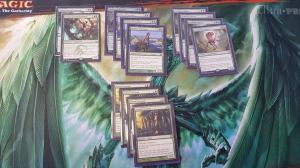 In the interim, he posted some more cards for sale on a local facebook group and started selling his good stuff.  When I saw him the following week, he still hadn’t gone through to find the cards I was interested in–but in the process of negotiation, I wound up buying all of his non “good stuff.”  It wasn’t my finest hour, but I make bad decisions when faced with potential for good deals (big surprise, eh?)

My mindset was that he claimed to have 4x playsets for four different sets (in actuality, I’ll be lucky to get two) and I generally buy them for $20 each online, so I didn’t mind paying $80 for those.  He also pulled out some more fetchlands and other choice cards, that I’d agreed to pay his asking price of $75 for.  So, that just left me to wonder how much to offer for the rest of the cards.  He had about 5000 cards of various sorts (All from newer sets) and I wasn’t going to pick through them to see what he had.  My thought was that the “going price” for bulk is about $7 each, so that’s at least $35, and he did have a fair number of rares in it, so maybe $225?  Of course, the logic was flawed in all sorts of ways: I was paying full price for bulk, I had no idea how many rares (or if anything was good in it), and I was overpaying for 4x playsets that didn’t exist.

I was on painkillers though, so we shook hands and made the deal.  By that evening, I was surprised at how many rares were included in the deal, and there were even a few occasional good ones, so I should be able to make my money back on it.  Still, the original plan was to just get some cheap singles (And the fetchlands), and I was already almost $400 into this.  The more I thought about it, the more I developed a bad taste in my mouth.

So I messaged him–not to renig on the deal, but to let him know that if he had trouble selling his good stuff, that I’d be happy to pay him more than a local store would.  The mindset was that he’d go to the store and they’d make him an offer, and I’d beat that.  I wasn’t going to pay the prices he wanted (which were all less than TCG low, mind you)–not because his prices were too high, but because I didn’t need the stuff and was already too deep into this collection.

The thing is, he didn’t seem to want to go to a store.  I made him an offer based solely upon the prices he mentioned and the cards he described (I’m not super into Magic, so I dont know that much about new sets/prices).  I used the mindset of a former employer of mine (I used to work at a card/comic shop), where we offered up to 25% in cash value for cards that we wanted (50% in trade).  Of course, if we didn’t want/need the stuff, we offered less.  So, based upon his math, the cards were worth $385.  I figured that a local store would give him (max) $100 in cash–so I offered him that.  After a day or two of really weak haggling, he mentioned that he had some more cards that weren’t originally included, and threw them in.  Based upon that, I wound up giving him an extra $40 for the lot, but I made him deliver them to my place.

In total, the “good stuff” included:

According to MTGprice.com, the “total value” of that lot is actually $628.48 and the price I could sell it to if I sold every card to an online vendor (not feasible) for their best price would be $308.40.  Still, that’s a great deal for $140–I shouldn’t have any trouble getting my money out of that. 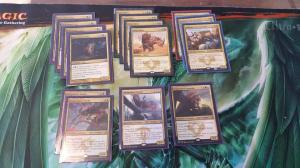 So, in total, I’m out $510 (did I really just spend that much on Magic cards), and after I do alot of sorting, I should be able to make that money back and keep the actual commons/uncommons that I wanted (and hopefully the fetches, as they’re supposed to be “an investment.”)  We’ll see in time if I ever do that, and if I ever make any money on this stuff.  I just wanted to get it documented so I would know one day what I put into this lot. 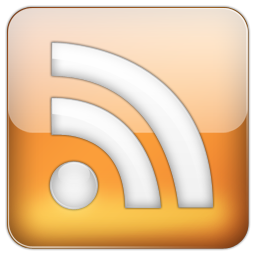