So, on my recent vacation, I was separated from all things gaming for almost two weeks.  The good news is that I was taking a trip with some friends of mine that do play board games, including one that plays 40k (for longer than I have, if you can believe that)–who, coincidentally, was the one that pointed out the good ship Ultramar.

Anywho, before the trip, I went ahead and purchased a few travel friendly games.  I didn’t bother to play any of them in advance so that I wouldn’t have any sort of advantage.  In total, I purchased six games, exactly none of which I’d ever played (or really even heard of) before.  To avoid buying duds, I spent some time researching travel board/card games online (mostly over at Board Game Geek’s website).

In order to keep the post length manageable, I figured I’d do a brief review of three games in each of two posts.  So, in the order that I wound up purchasing them, here goes (note: the titles in all of these reviews link to the BGG page for the appropriate game):

Earlier I’d said that I’d never heard of any of the games I purchased; however, I have played Bang! before.  The difference is that I’d played the card game version and not the dice game (which I honestly hadn’t heard of before).  I really liked the card game when I first played it–enough so that I bought both it and the Dodge City expansion (which were the only ones available at the time–though I understand they have a few more now).

Anywho, while the card game seemed great at first, it definitely has some flaws.  The first of which is that you need a lot of players.  While you can officially play with three, it really takes at least four to play, and five if you want to have access to all of the roles (the Deputy doesn’t unlock until that point).  It also takes a long time to play, as you can get jammed up not having enough range to shoot at the players you want.  Another problem (and perhaps the biggest) is player elimination:  you can sometimes get killed completely before you even get a turn, which can lead to an hour or more of waiting around for the game to finish (since it does play fairly slow sometimes).

The dice game seems to have resolved these issues.  First, it plays far faster than the card game, with the estimated game length at 15 minutes.  This eliminates the issues with player elimination as well, since you really don’t have to wait long to jump back into the game.  It also natively has an ability which allows you to shoot at people 1-2 spots away from you (though no farther–although that wasn’t an issue for us as we never played with more than five people), so that’s an advantage as well.

Essentially, it’s very similar to the original game, with the same characters (who possess many of the same abilities).  Starting life totals are higher, but they go down much faster.  Each turn, you roll a set of five dice with the ability to re-roll twice more (a la Yahtzee).  Each face of the die contains one of the following:

Obviously it lacks some depth that the original game has (for instance, there are no misses at all, and many of the other fancy effects like Cat Ballou are missing as well), but it does a good job of encapsulating the original game in a fast and easy to grok game.  It should be noted that for all of the games we played during the cruise, we had an 8 year old and a 10 year old playing right along with us, and they picked it all up quickly.

Overall, I think this was a good game.  It had all of the advantages of the original game, and fixed the problems as well.  If you liked the card game, I’d definitely pick up this one. 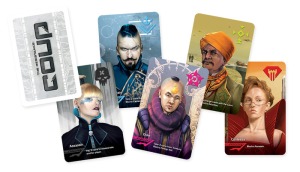 This game seems too basic to be fun.  If I told you that a game consisted of nothing aside from a deck that contains multiple copies of five different cards and a pile of coins, would you think it could be fun?  Surprisingly, it really turned out to be.

The premise of the game is that you’re trying to influence others by any means possible in order to rise to power.  Your influence is represented by a hand of two cards–so when you lose influence, you lose a card.  When you’re out of cards, you’re out of the game–and there is no way to get cards back.

Each of the cards has special abilities that allow you to take actions during your turn, or to block others’ actions.  Since other players can’t see what cards you have, you can easily bluff during the game to perform actions you shouldn’t be able to, or to block people.  The way to lose cards (influence) are to:

The key to this game is really knowing who to bluff and when–sometimes it just works out.  The games play really quickly, and after playing it several times, I don’t feel like it’s the sort of game you can master.  It all depends on the players around you, and how willing you are to push the bluffing.

Again, a cheap, quick and easy game.  I’d recommend it to anyone.

The last game I’ll be reviewing today is sort of a “guess who” style game about finding Jack the Ripper.

The game sets up in a 3×3 grid of city streets (randomly distributed) with the “Mr. Jack” player choosing a citizen at random.  Each tile depicts one of the citizens and Sherlock Holmes, Watson, and an out-of-sorts dog walk around the edge of the city peering down the streets to find the bad guy.  At the end of each turn, Jack determines whether any of the characters can see him down the streets, and then Sherlock flips over any of the tiles that have been eliminated from possibility.  Over the course of 8 turns, they have to maneuver themselves so that they can figure out which citizen is really Mr. Jack.

The actions that can be performed consist of moving each of the characters clockwise around the board, spinning / swapping pieces, and eliminating suspects one by one.  What makes it pretty innovative is the way you determine what actions are available in a given turn.

Each of the actions is printed on one side of four chits.  During the first turn, Sherlock throws the four chits in the air and then chooses one action to perform.  Mr. Jack then gets to choose two of the remaining actions, and finally Sherlock gets the last one.  During the second turn, all of the pieces are simply turned over (to evenly distribute the actions) and the process is repeated in reverse order (ie. Jack gets one, Sherlock gets two, and Jack gets the last one).

While none of the actions seems like rocket science, trying to figure out what your opponent can do with that one last chit seems incredibly difficult.  Granted, we didn’t play this but two times (with Mr. Jack and Sherlock eaching taking one game), but I think this has some replayability as well.  Sadly, it was limited to just two players, so it didn’t get much game time with our group during the cruise.

Still, I liked the game, and it’s only about $10, so I’d recommend it to groups that have small numbers of players.  Hell, I’m sure to play this with Derek or Brandon some week…

Well, that’s it for these three reviews.  My next post will review the other three games: Love Letter, The Hive, & Zombie Dice.  Stay tuned!