In my recently post about Frugal Gaming (an effort to guilt me into spending less money on the hobby), I realized there are a few topics I really should’ve blogged about in the recent past.  The first (or rather the easiest) that came to mind was I recently picked up a collection of board games from a local player off craigslist. 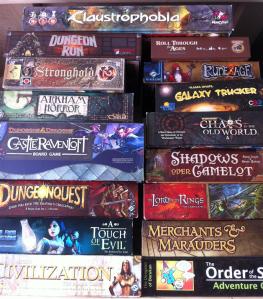 He had a good list of games that included some of my personal favorites and one that was on my list to purchase one day (Stronghold), another (Dungeon Run) was one I heard was light-hearted and fun, and I would’ve liked to have tried it, but I didn’t expect to buy it (at least not for full retail–but I can’t pass up a good deal!).  The list of games he had up for sale (divided into my personal categories was as follows) along with the MSRP/price at the War Store (just so I can figure out how good a deal this was):

Almost half of the games he had I’d either already owned (and loved), or played at a friends house (and not thought a whole lot of). Of the list that I owned already, three of those have to be in my personal top five favorite games, so I figured he had pretty good taste.  His prices on each game were pretty reasonable (about 60% off retail on each one), but I really only “needed” one or two.  He did mention that he’d offer a slight discount if someone wanted to make a package deal, so I threw out an offer for the whole enchilada, and he accepted.

Granted, I already owned a good share of these games, but I figured if I could buy them at a good enough discount, I could see if anyone else anted to buy or give them away as X-mas presents.  (is it uncouth to give out used items as X-mas presents?  Personally, I’ve nothing against used games, and I see this as a way to stretch my dollar, even in a gift giving spirit.  Hopefully nobody would be offended if I gave them one of these).

In hindsight, now that I’ve totalled them up, this was an amazing deal.  The total retail price on these is $859.40.  Sure, there are duplicates in there and games that I generally wouldn’t buy otherwise, but seeing as I only paid $200 for the lot, that’s a huge savings.  The total price to buy all of these games from thewarstore would be $558.84 (and that wouldn’t include Dungeon Run & Order of the Stick–since they don’t carry those).  Yeah, I got a fantastic deal on these.

To top it off, when I met him to make the deal, he threw in two more games:

For anyone interested in my opinions on particular games, I’ve already done some really simplified reviews of a few of them.  You can find those links below:

I hope to review some of the others in the near future as well.  Well, that is, if I can ever get a game of Stronghold in!

By the way, for anyone that’s looking to purchase any of these games, you can always try your local game store, ebay or the like, but I buy almost all of my games from www.thewarstore.com.  They have fantastic prices, customer service, and amazing deals on shipping (which is particularly helpful if you live in Alaska–$5.95 to ship any amount of games!).  Check ’em out.

2 comments on “Board Games Galore!”