I know what you’re thinking… what a queer matchup.  It’s hard to think of a more diverse group of forces to throw into a single game, but this was just the outcome of an (almost) random pickup game.

Our local victim is Jeff (and  by victim, I mean Tau player).  He’s a young guy, with tons of heart, and not a whole lot of luck, but he’s got a great attitude, and never complains.  It’s that plucky spirit of his that earned him the “Best Sportsman” award at our most recent tournament.  Anyway, after that tournament, the winner (and by winner, I mean our local IG mechanized army player), Cole, vowed to play a team 2v2 game with Jeff to help him finally get a win under his belt.

I happened to be the local victim that was chosen to play the role of the loser.  Well, myself, and an infrequent comer to our gaming club, Chris.  Chris plays Dark Eldar, and since I’d never played against him, and always enjoy games vs. Cole & Jeff, I jumped at the chance… I just had to work up a 1750pt list.

Sadly, I don’t have the details of everyone else’s force.  Cole’s was largely his standard list (sans Marbo).  You can see an example of that here.  Jeff’s list was well, full of mechanized Tau, and Chris’ list was somewhere in the realm of 7 raiders & 50 dark lances, with several squads of witches thrown in to boot.  Man, he had a nasty looking force.

For those of you who are used to my battle reports, and the detailed play-by-plays I normally write-up, you may be disappointed by this batrep.  Since there were several players, and so much going on, I didn’t get to take as many pictures or notes as I would’ve liked.  We also had to kick it into overdrive for the last two turns (and cut the game off early)… so, this post will be a brief recap of the memorable events, with a couple of action shots of the battle.

We opted to play with a random selection from the battle missions book, and rolled up “First Contact.”  Since we had no Tyranids, we had to decide which team would fill that role, and there was some debate.  At first, we rolled off, and they won, but then Chris brought up the fact that his codex says that in missions where there is an attacker and a defender, he is always the attacker.  Strictly speaking, this mission had no defined attacker and defender, but it seemed fairly obvious that the Tyranids fit the role of the attacker; however, the word “attacker” didn’t appear anywhere within the mission.  Cole and Chris had a differing of opinion, and I didn’t care to rock the boat, so we conceded first turn to them.  If I do play that mission again against Chris, I think I’ll let him have first turn though, because it just seems right.

Anyway, if you’re unfamiliar with this particular mission, your deployment is by placing models in randomly selected board sections.  The other special flair for the mission is that the attackers use the same random method of determining which table edges they move on from, and that all non-vehicle models have the ability to capture objectives, of which there is one in the center of each section.

In deployment, we spread out fairly well, but dropped almost a third of our units in or around quarter 3 (the southwest corner).  Just by the luck of the draw, I guess.   They then proceeded to plow onto the table and opened fire.  So, rather than give a turn by turn, I figure I’ll throw up some pictures of the battle and speak a little bit about what each one brings to mind in the game: 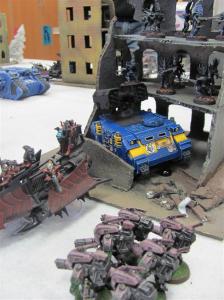 The other quarter that we had a fair amount of units in was quarter one.  We wound up with an attack bike, Whirlwind, Dark Eldar Squad, and two crazy skimmer tanks in that one section, with really only one piece of terrain, so we made the most of it.  It turns out that the same quarters we deployed heavily in just happened to be the same ones that Cole & Jeff came on, so there were bloody battles on either side of the board.  My Whirlwind was destroyed by a battle cannon before he could do anything, as was the attack bike.

The Dark Eldar warriors eventually broke and ran off the board, and some witches snuck in to try to take the objective at the end of the game.  I had also deep struck both of my dreads here in subsequent turns, and though neither did anything (other than lure melta-gun fire), their drop pods did a respectable job at killing troops.

Have I mentioned how much I love deathwind launchers?

On the last turn, this is one of the quarters that helped decide the fate of the game.  Cole had driven his chimera into the ruin as a last ditch attempt to contest an objective, so Chris charged in with his Archon to destroy it.  Did it work?  Well, you’ll have to wait to find out…

The picture at the right was just a cool pic from the game.  I’ve had so many problems with Cole’s flyers in the past that I made sure that they were a priority this game, so I had Chris take them down as soon as possible.  With so many dark lances & melta equivalents, you’d think he would’ve had no problem taking out two armor 12 vehicles, right?  Well, he had no problem penetrating them, but luck just wasn’t with him in actually destroying them.  It got to the point that he immobolized one valk, shook it to keep it from firing, and then surrounded it so the guys couldn’t disembark.

The valk wound up protecting him from the nearby leman russ variants, as they couldn’t drop their pie plates on the squad without touching a friendly vehicle.  Ultimately, they took a ton of small arms fire, and were whittled down extremely thin, but they held their ground and did great the entire game. 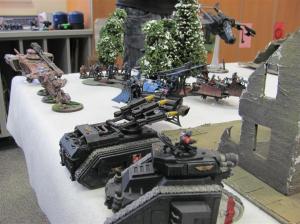 The other side of the board was inhabited by a Hammerhead, three Crisis Suits, a Manticore, a Space Marine battle squad, a Demolisher, Straken & friends in a Chimera, a Penal Legion squad, Dark Eldar jetbike & warrior squads,  two skimmers, and a scout squad in a Storm.  Needless to say, there was a lot of bloodshed here as well.  Curiously, the tanks played into the game very little.  The manticore fired off only one turn, and managed to do absolutely nothing, before spending a few turns being picked on by witches.  The demolisher managed to fire once as well, and it’s shot scattered into the middle of nowhere, before it too succumbed to the witches.

The rest of the dark eldar basically died horribly to the Penal Legion & Straken (who I’ve come to respect–somewhat, but only because he’s not an IC and can’t be picked out of a squad… which is overpowered to me when you consider his squad has FNP).  The tau died horribly to scouts in a storm (yes, I love that unit as well).

The hammerhead proved immune to lascannon and multi-melta fire, and also played into the last turn of the game.  We had several one wound models on that end of the board and they’d have to kill them all to hold that board quarter.  Did they do it?  …  I’ll get to this at the end…

Speaking of Straken, he was pretty beastly.  Running around with all of those ablative wounds.  He wound up charging my assault squad and chaplain, who eventually died to the fact that they were fearless, but we stayed far enough away from him that he wasn’t able to rampage around the board willy-nilly.  I liked this particular shot because it captured a moment in the battle after he’d decimated my assault squad and moved forward to another victim.  I’ve been playing with my camera’s apeture setting and trying to get some depth of field in my photos.  This is a marginally successful attempt to do just that.

To the left, you’ll see another attempt at a photo with some depth-of-field.  This one, however, is too dark for my likes, but I think this is due to the way the camera takes pictures with more depth, and how it takes in light.  I did take one photography class in high school, and vaguely recall something to that effect.  Hell, I’m just impressed that I remember the term “depth of field,” since it was basically a throw-away class that I took 18 years ago.

Anywho, in that same quarter, Witches eventually came in and killed off the penal legion, but they were decimated by the Hammerhead in the photo, plus a last minute addition to the quarter, in the form of six fire warriors (who in turn, died in assault to the attack bike).  It was one of those flip-flop battles of attrition.  By turn five, only a jetbike, straken, and my attack bike were in the quarter for scoring units…

One thing I liked about this game was that everyone had essentially a fully painted army.  Granted, there were a few exceptions (mostly my turrets), but it did make for better photos of the game.  I know I’m not a big fan of painting, but when you see pictures like this, it almost makes all of the time spent painting seem worth it…

So, to wrap things up, Cole had to take off early, so we decided to call it at turn 5.  At the start of the turn, things looked quite promising for us.  They effectively held three objectives after their movement phase, and we held zero; however, we had several units nearby:

Our enemy really only had 3 scoring units left on the table: Straken (#3), Fire Warriors (#6) and drones (#4).  All in all, I thought we were sitting pretty… but things didn’t work out quite like I’d planned:

If any one of those didn’t happen, I think we’d have pulled a draw, but luck was on their side, and they got Jeff a win (finally!).  This was an exceptional game because the players were cool, and it was so evenly matched.  It came down to so many chances either of had to win, but in the end, it was them.  Congrats to Cole & Jeff! 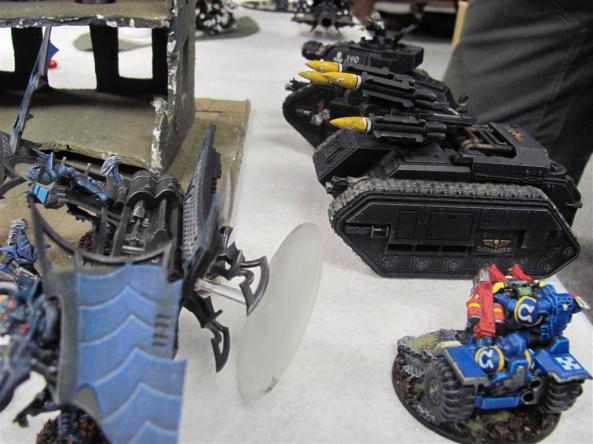